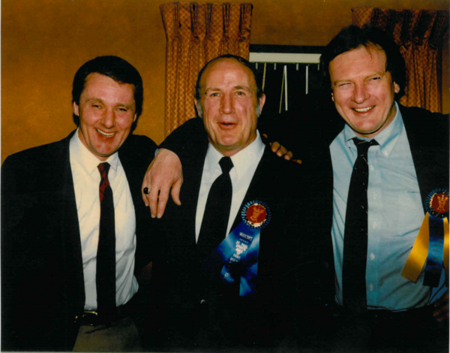 It has been my privilege, since boyhood, to have met many of boxing’s greats. But for the purpose of this article I will confine my comments to the St. Paul boxers I have known.

An old expression among boxing people is that the quickest way to a lasting friendship is a good sock in the nose. The idea has been expressed in other ways, and might be moldy with age, but after almost 40 years in the business, I still believe it.

I’ve seen it happen in amateur and professional rings. Two kids from opposite sides of the tracks quickly forget the imagined differences between them after three rounds in the ring. After taking one of his left hooks on the chin, you gain respect for a fellow you might have viewed as different or inferior.

Even crusty old pros remember some of their toughest fights with fondness. If they didn’t lead to real friendships, they created a respect for the other fellow.

I’ve made many boxing friends and acquaintances throughout Minnesota over the years and the list seems endless even when I confine it to St. Paul. Some of them are dead now and I seldom see those still living. But I havn’t forgotten them.

I grew up watching the fights. One of the St. Paul oldtimers I remember best is Mike O’Dowd. He was the world middleweight champion, and later operated a saloon in St. Paul.

Billy Whelan is another. He was a great lightweight fighter. And Billy Miske, Jr. is another. His father fought Jack Dempsey. Whenever I think of Lee Savold I can’t help remembering that he fought Joe Louis.

And there was a fellow named Bill Hart who was called the Fighting Fireman. He later turned to professional wrestling.

The Gibbons brothers, Mike and Tommy, are two of the finest fighters in St. Paul history. Tommy lost a 15-round decision to Dempsey for the heavyweight title that bankrupted Shelby,  Mont. Tommy was a Ramsey County sheriff after he quit fighting. Mike was an exceptional fighter too. His son Jack was an all-around great athlete as well as a boxer. He preceded me on the state boxing commission.

Billy Emkie and Marv Wason are old-time heavyweights. Billy Gillespie who fought Wason is another. My Sullivan was one of the top welterweights in the country but lost twice to another St. Paul fighter, Billy Light.

Of course, you can’t talk about St. Paul boxers without mentioning the Flanagans, Del and Glen who were two of the finest boxers in St. Paul’s history. Del fought and beat several world champions in nontitle fights. Many boxing people thought he should have been welterweight champ.  Mike Mandell is another good heavyweight. And my brother, John O’Hara, as a middleweight, light heavyweight and heavyweight.

One thing that sets boxing apart from other professions, is that it cuts across racial boundaries.  I’ve met fellows I might not have otherwise.

Of course, there are the promoters and managers, too. Murray McLean, Jack Raleigh, Spike McCarthy, Billy Colbert, Lou Katz and Mike Thomas are fellows I knew well from that end of the game.

Some of these fellows are dead now.  Others are scattered around the country. But whenever I think of boxing in St. Paul, many of their names come to mind.

Many of them have interesting backgrounds.  But, those are other stories, for another day.

In 1980 when Jim wrote this story, larger-than-life characters kept boxing fans busy. In July Minnesota would host its first world heavyweight title bout, champion Larry Holmes challenged by the Fighting Frenchman Scott LeDoux, with Muhammad Ali still in the game at ringside. See Round 11, entitled Muhammad Ali. Holmes would win by TKO in the seventh.

In June and again in November Roberto Duran, The Hands of Stone, and Sugar Ray Leonard would battle for the WBC welterweight title (147 lbs. max). Duran would win by decision in June and quit with the words “No mas. No mas box!” in November.

Scott LeDoux was inducted into the Minnesota Boxing Hall of Fame in 2010 as a member of its inaugural class with the likes of The Black Pearl Harris Martin, Mike Gibbons, Tommy Gibbons, Glen Flanagan, Del Flanagan, Rafael Rodriguez, Will Grigsby, Bill Kaehn, Don Riley, and Dr. Sheldon Segal.

Jim’s ability to tell a story was part of his charisma. He also loved to laugh. There’s a 1986 photograph of him with hockey legend Herb Brooks and sports columnist Charley Walters. (Walters pitched for the Twins.) All are having a good time, and you can just tell that Jim is saying something humorous.

Boxmeyer begins with a story:

A local boxer named Jimmy O’Hara was on the card for an amateur bout at old Stem Hall in the St. Paul Auditorium one night. His opponent: a rough and tumble fighter….

“We’d gotten our instructions from the ref, and I was waiting for [the guy] to come out of his corner,” Jim recalled. “When the bell rang, he came at me in a headlong, mad dash, flailing his arms, trying to hit me. I sidestepped him and he went right on by me, over the ropes and landed in a heap of metal chairs outside the ring.”

[The guy] was rendered senseless by his spectacular flight, he took a 20 count, and O’Hara won the bout by a knockout.

“Imagine that,” said Jim. “The first and only time I ever scored a knockout without throwing a single punch.”

Another of Jim’s stories in Boxmeyer’s article could be called “Sammy”:

At one of those parties [at a local restaurant], a well-known character I will simply call Sammy got blasted and couldn’t stand. Jimmy threw the guy over his shoulder, dumped him into his car and said, “All right, Sammy, where do you live?”

Sammy could barely talk, but Jimmy got an address out of him, and when they got there, Sammy finally made Jimmy understand that he lived on the top floor, so Jimmy threw Sammy over his shoulder again and trudged up the stairs carrying the unconscious Sammy.

“When we got to his floor, Sammy jumped off my shoulder, ran over to an apartment door and began banging on it. “Come on out of there, you (blankety-blank)! I got the guy here who’s gonna pound the (blank) out of you!””

“All of a sudden the door opens,” said Jimmy, “and this monster comes out. He’s got a head like a bullet and around his throat he’s wearing a studded dog collar. I looked at him, and didn’t want to fight him. He looked at me, and wanted no part of me, so we both chased Sammy down the hall and beat the (blank) out of him.”

Jim had a lot of quick stories. Some were recorded by Sean Kelly in a 1998 interview. One is about St. Paul light-heavyweight Tommy Gibbons:

Tommy was popular with the youth of St. Paul. I heard him speak when I was a young man…. He would always end his talks with two points: “I’m the man that Jack Dempsey went 15 rounds with,” and, directed at the dads, “Take your boy hunting. It’s better to be hunting with him than be hunting for him.”

If the St. Paul Irishman wasn’t a national household name before his fight with Dempsey, he was immediately afterwards. Gibbons went on tour for two months with a theatrical group. On stage he sparred and talked about the fight. (Jack Cavanaugh, Tunney: Boxing’s Brainiest Champ and His Upset of the Great Jack Dempsey, Chapter 12 (Ballantine Books 2007), Kindle Edition.)

Tommy Gibbons was inducted into the International Boxing Hall of Fame in 1993. He and his brother Mike are ranked number three on the list of Boxing’s Best Brother Combinations, a list Steve Farhood put together. (Bert Randolph Sugar and Teddy Atlas, The Ultimate Book of Boxing Lists, 78 (Running Press 2010).)

George Barton, Jim’s famous predecessor on the Boxing Board, was a professional writer of tales. In his December 1959 article in The Ring magazine, he reported that Tommy Gibbons by all rights could have claimed the world heavyweight title on the Fourth of July 1923:

Knowing the majority of spectators, among them several hundred gun-toting cowboys, were hostile toward Dempsey and [his manager] Kearns, I asked Tommy why he did not drop to his knees and claim the fight on a foul after Dempsey hit him low for the third time.

“Had you done so, Tommy,” I said, “Referee Dougherty undoubtedly would have been coerced by those cowboys into declaring you winner on a foul.”

Gibbons’ reply was typical of his character and sportsmanship.

“George,” said Tommy, “if I could not win the championship on my merits as a fighter, I would not want it.”

Another quick story from Jim is about St. Paul’s Billy Whelan, who boxed professionally as a featherweight (126 lbs. max.) around the same time as Tommy Gibbons:

Billy Whelan was a good fighter, but in one bout he cut an eye and walked to his corner. The ref asked him, “Are you gonna fight anymore?” Billy said, “You bet, but not tonight,” and went out of the ring.

To be a storyteller, it helps to have what you might call presence. Bill Bankston, a friend for many years, wrote the following about Jim in 2000:

Presence, what is presence? His physical image filled the door. That’s it, when I first met him over seventeen years ago, he filled the door. Shoulders back, head connected to the chest with no neck, square, solid, with the reach and then the hands. The hands were huge, strong, yet gripped with just the right touch. The touch that did not bite, but conveyed strength. That was it, the strength. Solid, like a rock he stood in the door. He filled the frame and extended his hand. The kind of man that if you hit him as hard as you could, he would laugh at you as your hand cracked.