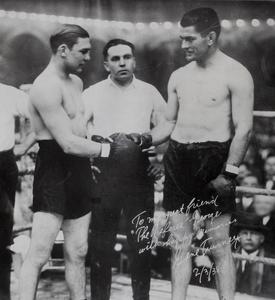 Boxing is guts and inspiration, training and planning, footwork and execution. Practitioners are artists. “Boxing is sort of like jazz,” said heavyweight champion George Foreman. “The better it is, the less people can appreciate it.”  (Bert Randolph Sugar and Teddy Atlas, The Ultimate Book of Boxing Lists 13 (Running Press 2010).)

Jim pointed to what’s right about boxing – past, present and future – including the countless volunteers challenging young people, win or lose in the ring, to be good family members and citizens.

In terms of dignity within the squared circle, Jim was clear: he didn’t favor the spectacle of tough guys standing toe-to-toe slugging it out where, and here’s the critical point, neither fighter is sidestepping, slipping or deflecting punches to set up the counter. He favored the thinking-man’s game where the boxer who out-thinks the other gets the win, whether by decision or kayo.

In the early 1700s Englishman James Figg, arguably the father of modern boxing, also taught fencing. They say he had a record of 270 wins and only a single loss, all bare knuckle. The Boston Strong Boy John L. Sullivan at the end of the 1800s became the first titleholder to prefer gloves. (Christopher Klein, Strong Boy: The Life and Times of John L. Sullivan, America's First Sports Hero, Chapter 7 (Lyons Press 2013), Kindle Edition.)

Jim compared boxing to fencing, and here the word parry, which means to deflect or block an incoming attack, is vividly applicable to both sports.

He weaves and ducks to hit. He ties up his opponent. He clinches, getting out of tight spots.

The boxer moves in and moves out and side to side. He circles or dances or runs or gets on his bicycle, working the jab and throwing combinations.

The boxer probes for the tell.

One of the issues for anyone considering a boxing career, according to Jim, is not whether you’re tough but, rather, whether you’re smart. By “smart” he meant the in-the-ring ability to think on your feet, manage time and space, and ultimately hit more than get hit.

Inside the ropes, as on the street, the practitioner of the art of self-defense lives by his wits.

Jim urged all boxers to plan long-term and practice self-preservation, as in the name of Mike Gibbons. Known as the St. Paul Phantom and the Wizard, Gibbons is the father of the St. Paul style of boxing, which Jim called the “School of No Get Hit" to set up the counter. The famous artist LeRoy Neiman grew up a St. Paul street kid like Jim. In his 2012 autobiography Neiman described the St. Paul style thusly:

The Irish boxers were the champion pugs in those days. They weren’t big punchers — they developed their own slyboots techniques, which is why they called Mike Gibbons “the St. Paul Phantom.” He’d been former middleweight champion of the world and was the smartest and fanciest of the fancy footwork school of St. Paul pugilism — on account of he created it. Slip, feint, shift, duck, just jab and counter was their sly style.

Gibbons had a claim to the middleweight title after the death of the Michigan Assassin Stanley Ketchel in 1910. (The Ring Boxing Encyclopedia and Record Book 19  (The Ring Book Shop 1979).) Gibbons is ranked number five on the list of the top defensive fighters of all time and number 10 on the list of the greatest Irish-American fighters of all time. Bert Sugar put the lists together with Teddy Atlas. (Bert Randolph Sugar and Teddy Atlas, supra, at 162 and 143.)

In 1923 Gibbons' brother Tommy would demonstrate his own greatness by becoming the only man to go 15 rounds with Jack Dempsey. Tommy had confidence from working with Mike, who in 1916 had whipped Jack Dillon, reputed to be just as deadly as Dempsey would ever be. That 10-round newspaper decision at the St. Paul Auditorium irrefutably made the Gibbons name as big as any in fistiana.

With 245 pro fights, "Jack the Giant Killer" Dillon was inducted into the International Boxing Hall of Fame in 1995.

There’s a photograph showing Harry Greb and Gene Tunney before their bout in St. Paul on March 27, 1925.  Tunney dominated the fight as Greb was no longer in his prime and Tunney was on his way to the top. Although the one-eyed Greb was arguably the toughest fighter of all time, Jim favored the boxer. Of course Jim was partial to the Irish, especially since Tunney was arguably the greatest Irish athlete of all time. Jim also liked him because, as Bert Sugar observed, Tunney “drew on the style of that prince of the middleweight division, Mike Gibbons….” (Bert Randolph Sugar, supra, at 40.)

This photo is one that Jim kept. On the left is the reckless fighter hiding the fact he could see out of only one eye. On the right is the calculating boxer. Who’s between them? Why integrity, Minnesota’s George Barton himself. They say Barton still holds the world record for having refereed over 12,000 amateur and professional bouts. With 27 years to Jim's 25, Barton also is the longest-serving Boxing Commissioner in Minnesota history if not all of history.

In large measure this photo sums up the sport of boxing, with perhaps the puncher Jack Dempsey being the only missing part. When you consider that the year of the photo is 1925, you can almost see the long shadow of Dempsey, then the heavyweight champion of the world. So really you have a fighter, a fair-and-square ref, and a boxer – while the puncher is in the back of everyone’s mind.

Jim also valued the photo for at least two personal reasons. First, the photo is interesting because from the toughest streets of St. Paul through the Ramsey County Home for Boys to the St. Paul Auditorium, Jim was a street fighter who became a boxer. Second, when the photo was taken in St. Paul in March 1925, Tunney’s most ardent fans included some of Jim’s older brothers, and even they couldn’t have imagined that Tunney would take the title away from Jack Dempsey 18 months later.

At the time of the photo Greb was the world middleweight champion (160 lbs. max.) and Tunney the American light‑heavyweight champion (175 lbs. max.). Greb is ranked number five, pound for pound, on the Bert Sugar list of the top 100 fighters of all time, after only Sugar Ray Robinson, Henry Armstrong, Willie Pep, and Joe Louis. Tunney is ranked number 13 out of the top 100. (Bert Randolph Sugar, supra, at 14, 15, 40 and 42.) Harry Greb schooled Jack Dempsey when they sparred on a couple of occasions in 1920. See Round 10, entitled Joe Louis.

Jim and his wife, Kitty, raised four children. So what did he and Kitty teach their children from boxing and life? Foremost: perseverance and dignity. Learn a skill, whether in boxing or any other endeavor, and then try and have the self-respect to keep trying to execute with integrity. If dignity is self-respect, Jim defined integrity as keeping to the high road.

Some other lessons don’t take a lifetime to learn. Punches need to pop: Jab…Jab…Boom. Jab…Jab…Boom. The chin, at its point, is a “light switch.” When it’s hit the opponent “drops like a sack of potatoes.” Don’t blow your nose! (After taking a shot to the face, your eyes will blacken if you blow your nose.) Don’t quit your day job. Never let your guard down. Show no one your back, and be alert for the sucker punch – it could be a Sunday punch.

Jack Dempsey resorted to the undignified sucker punch, which also was the Sunday punch, in September 1920 when he put his title on the line against St. Paul native Billy Miske in Benton Harbor, Michigan. Miske had just gotten up off the canvas, and Dempsey was lurking behind him. (Clay Moyle, Billy Miske: The St. Paul Thunderbolt 124-125 (Win By KO Publications 2011).)

Before he was champ Dempsey fought Miske at the St. Paul Auditorium in May 1918. Winning by a shade, Dempsey said later that night: “If I ever have to fight another tough guy like that I don’t want the championship. The premium they ask is too much effort.” (Clay Moyle, supra, at 54.)

Jack Dempsey is ranked number nine on the Bert Sugar list of the top 100 fighters of all time. (Bert Randolph Sugar, supra, at 26.) Miske was inducted into the International Boxing Hall of Fame in 2010.

Dempsey lost the title to Tunney, a 10-round decision, on September 23, 1926, in Philadelphia. When Dempsey unsuccessfully tried to regain the title from Tunney on September 22, 1927 in Chicago, he might have positioned himself to use the undignified sucker punch. But as The Ring magazine points out: “Just so long as Dempsey refused to go to a neutral corner so long did referee [Dave] Barry refuse to start counting [when Tunney was down].” (The Ring, June 1972, at 45.)

In the time it took Dempsey to submit to the farthest neutral corner after connecting with his vicious left hook in the seventh round, he'd given Tunney precious extra seconds to rest and clear his head. Tunney is reported variously as having no less than 14 seconds and as long as 18 seconds before he stood to beat the official 10 count. (Id.) Bert Sugar called this long count “perhaps the most famous moment in all of boxing.” (Bert Randolph Sugar, supra, at 41.) Tunney went on to get the decision in this 10-rounder, and they say Dempsey was gracious in defeat.

Imagine the golden age of boxing: 104,943 fans witnessing the Battle of the Long Count at Soldiers’ Field in Chicago on Thursday September 22, 1927; and even more: 120,757 fans witnessing the shocking upset victory of Tunney over Dempsey at Sesquicentennial Stadium in Philadelphia a year earlier on Thursday September 23, 1926. (The Ring, supra, at 44 and 45.) Many of those fans knew a boxer personally or were boxers themselves at some level. In St. Paul, where both Dempsey and Tunney had fought on their way up, Jim’s brother and future mentor John listened for reports on the fights and couldn’t wait to test his own skills.

You can see Tunney dethrone Dempsey, and view Tunney’s footwork despite the rain and wet canvas, at www.genetunney.org. Watch for Tunney’s pops to Dempsey’s face, right-hand leads, early in the first round.

They say the single most difficult thing in sport is to hit a golf ball, with a baseball second. High on the list has got to be Jack Dempsey’s chin. So Tunney can be excused for missing it, especially given that he still connected well. Tunney executed when he saw the opening that he'd anticipated as part of his fight plan. As Dempsey prepared a left hook, pop pop. (Jack Cavanaugh, Tunney: Boxing’s Brainiest Champ and His Upset of the Great Jack Dempsey, Chapter 19 (Ballantine Books 2007), Kindle Edition.)

Now that’s the artistry of a boxer: guts and inspiration, training and planning, footwork and execution.