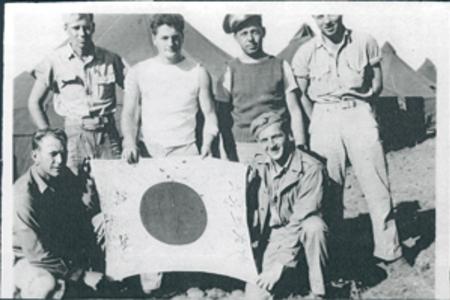 Born the 10th of 12 children and the sixth of seven boys, Jim enjoyed being part of a boxing family. He particularly looked up to his brother John who boxed professionally from August 1929 through February 1934 and who was a mentor thereafter.

John O’Hara was the genuine article. When he died in 1976, Minnesota Congressman Joseph E. Karth recognized him for his leadership and shared the story of the fight John had had with Ronald Reagan. The Congressman entered the following into the Congressional Record:

A few days ago John O’Hara, sportsman, promoter and teacher of young athletes, died in St. Paul. He is missed and will be missed throughout the upper Midwest where he was known as a mentor of aspiring pugilists. ***

"He’s the only man I’ve ever known who punched Ronald Reagan in the snoot. That’s back when political wonder boy Reagan was a sportscaster in Des Moines and John O’Hara was chaperoning boxers around the Midwest. John and Ron got into it over the respective merits of Al Van Ryan, an O’Hara protégé, in Omaha.

Before the ringside rhubarb was over, the fighters stopped to watch O’Hara and Reagan exchange fisticuffs in the best bout of the night."

We have to gather that this brouhaha went to no decision, but one thing we do know: with O’Hara in it there were no punches pulled and it was a fairandsquare skirmish.

John had strong connections with Congressman Karth, which is why he paid tribute by sharing one of John’s classic stories. In the version of the story passed down in the family, John scored a knockout.

John may not have been there physically but definitely in spirit when in the spring of 1976 Jim hosted a fundraiser in downtown St. Paul. The guest of honor to meet and greet: John’s pal Hubert Humphrey, then a U.S. Senator. Humphrey was in his sixties and robust, but less than two years later would die of bladder cancer.

John boxed professionally as Johnny O’Hara. On at least one occasion he boxed under the alias Jackie Ryan, April 10, 1930 in Mason City, Iowa.

Boxrec.com lists John as a middleweight (160 lbs. max.). They say middleweights rule boxing from the middle. They may have the speed of a welter and the power of a heavy.

Boxrec.com records 31 of John’s professional fights — 18 wins (eight by KO) and three draws against 11 losses. A draw, of course, is a bout neither fighter deserves to loose. In June 1989 Sugar Ray Leonard met The Hit Man Tommy Hearns at Caesars Palace, Las Vegas for the super middleweight title. This 12-rounder ended in a draw, and they say the cleanup crew made a killing redeeming all the betting slips that had been thrown away. The holder of the slip was entitled to a refund because of the draw. (George Kimball, Four Kings: Leonard, Hagler, Hearns, Duran, and the Last Great Era of Boxing, Chapter 9 (McBooks Press, Inc. 2008), Kindle Edition.)

John fought early enough in boxing history to have newspaper decisions. A newspaper decision is a bout left in the hands of the sportswriters. He was fortunate to have learned to box from Mike Gibbons himself, Minnesota’s most famous pugilist. Gibbons retired from direct contests in 1922 and became a boxing instructor. See Round 6, entitled The Boxer.

Retiring with a cauliflowered left ear as proof of his orthodox glory days, John had had a near-perfect record of 12 wins and only one loss (not to mention three draws) when he faced undefeated Glen Allen. They met on June 24, 1930 in Allen’s hometown of Atlantic, Iowa. Allen got the newspaper decision after this 10-round battle, and the two repeated with the same result six months later in Des Moines. Allen retired in 1932 with a 37-6-5 record, including newspaper decisions.

Another brother who was game to fight with or without pay was Mike Ehrich O’Hara, who was about a year older than Jim. Mike used an alias, which is unknown at this time, when he and Jim faced each other in Duluth. When Jim was asked if they took it easy on each other, he answered with a smile: “We did until the first punch was thrown.”

Mike never got the chance to become a mentor to young boxers. He was 27 when he died by the gun following a street fight in downtown St. Paul. See Round 3, entitled The Unspeakable. John and Jim helped boxers in Mike’s honor. A day didn’t go by when they didn’t think of him.

Besides John, Jim and Mike, there were four other brothers, all of whom fought at least at the amateur level: Ed Ehrich, Bill Ehrich, Bobby Ehrich, and Dick Ehrich. Ed was the oldest of the brothers and, at 6-foot-4, the tallest. It took a lot to get him mad, but he could really fight.

Bill had a barrel chest, and you wouldn’t want him to get a hold of you. He served in the United States Army. You could tell he was fearless. After the Army Bill painted all his tools green, whether he purchased them new from the local hardware store or second-hand at the garage sales he foraged regularly.

The war hero in the family was Bobby. As a United States Marine he served his country well in the Pacific theater of World War II, including at the Battle of Iwo Jima where he drove one of the landing crafts. There’s a photograph of him and some buddies in the Pacific holding up a captured Japanese flag when he still had a full head of hair. By the time the War was over, he was practically bald from the action he’d seen.

Dick, the youngest of the brothers and born in 1928, exaggerated his age and served in the United States Army in World War II before he was discovered to be underage. After he was sent home and reached age 17, his mother signed for him to join the United States Navy. Dick made the Navy a career, serving in Korea and Vietnam. As chief boatswain’s mate he was rough but fair.

Like countless other families back in the day, those seven brothers were part of the backbone of the golden age of boxing.​

Sworn in as the 40th President of the United States on January 20, 1981, Ronald Reagan was shot by a would-be assassin on March 30th of that same year. Tough as nails, Reagan survived.