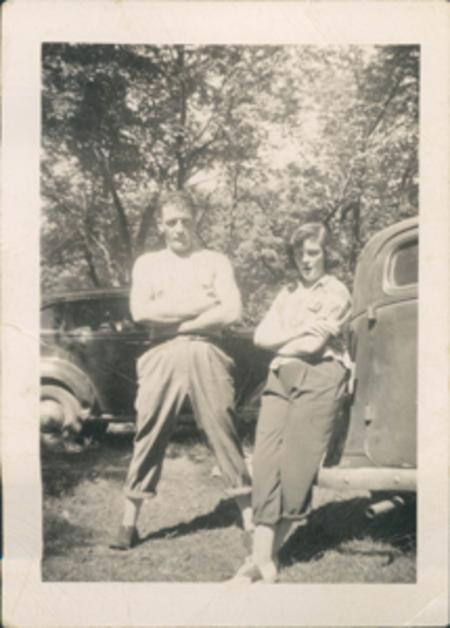 “The fight for survival,” said Rocky Graziano, “is the fight.” On Thursday July 17, 1947 in Chicago, Graziano knocked out Tony Zale in the sixth for the world middleweight title.

Born a southpaw 22 years earlier, Jim O’Hara was placed in an orphanage at six years of age with his older brother Mike and their youngest brother Dick. They were there because their father couldn’t find work and their mother was in St. Paul’s Anchor Hospital with tuberculosis.

In the orphanage the good nuns made Jim right‑handed. Little did they know that his naturally powerful jab would later surprise many a foe.

From the orphanage Jim and his siblings eventually returned to the Mount Airy, Rice Street, and East Side neighborhoods of St. Paul, including welfare housing projects.  Jim referred to his childhood neighborhoods as the badlands. “The farther you walked, the tougher it got," he said. "We lived in the last house, upstairs.”

Jim and his brother Mike looked out for each other on the streets, literally fighting for their lives. On at least one occasion they faced each other in the ring in Duluth. When asked if they took it easy on each other, Jim answered with a smile, “We did until the first punch was thrown.”

On Friday October 26, 1951 in New York a young Rocky Marciano knocked out an old Joe Louis in the eighth in what was the end of Louis’ long career. Mike and Jim, both heavyweights, followed the up-and-coming Marciano with keen interest: Mike the fearsome and fearless street fighter, Jim the scientific boxer.

Tragedy struck eight days later on Saturday evening November 3, 1951. Mike’s body was found in downtown St. Paul’s Jackson Bar on West 6th Street. Jim saw the unspeakable. Mike was only 27 at the time of the fatal shooting. The killer had been considered a family friend.

At the time of his death Mike had a wife and child to support and was looking for full-time work. He’d argued with the killer over a job, and it turned physical. In anger the killer left and returned with a gun. He then hid at his sister’s house from Mike’s six brothers while contacting the police to be taken into custody. The killer was the President of the St. Paul Bartenders Union of which Mike was a member. Tried and found guilty of manslaughter in the first degree, he was sentenced to 10-20 years at Stillwater State Prison. (10-20 Year Sentence Given … For Mike Ehrich Slaying, St. Paul Pioneer Press, circa February 1952.)

Jim was 25 when Mike was killed. He himself had a wife and child, and his wife’s grandmother, at home to support, and now Mike’s tragic death changed things forever. If the framework for Jim’s mental toughness hadn’t been completely formed, it was now. He faced his brother’s violent death and ultimately concluded you’ve got to forgive to better yourself. “Hate hurts you more than the guy you hate,” said Jim. “He doesn’t care. You need to forgive him for yourself.”

One of Jim’s life lessons was that there’s a time to fight and a time to forgive. Years later he regularly supervised boxing events within the walls of Stillwater State Prison. As he sat there ringside, he was reminded of the man who’d killed Mike and served his time there.

From Mike’s death, Jim saw reality for what it is. He wasn’t overly impressed with big shots. When told someone was so and so, Jim responded: “Is that right? Tell me, what happens when he gets hit on the chin?”

Jim didn’t pre-judge anyone on the basis of race or religious belief.  For him each man stood on his own merit.  When he boxed in San Francisco in the winter of 1947-1948, he drove there with another boxer who happened to be black. Later when others spoke of the supposed “Good Old Days,” Jim responded: “Yeah, right. You mean the days when a man couldn’t eat in a diner if he had the wrong color skin?”  He also no doubt thought of the night Mike was killed.

Jim had no time for oppressive people, phonies, or loud mouths. He appreciated those who know what they’re talking about, and he advised that whenever you encounter them, “Shut up and listen because you already know what you know.” By the same token he didn’t tolerate flattery. “Cut it out,” he said.

The same streets that at times could be dark and ugly fostered an appreciation of beauty. One of the guys from the neighborhood was the famous artist LeRoy Neiman, born in St. Paul in 1921, three years before Mike. From his childhood experiences Neiman spoke of the image of a good boxer as a thing of beauty:

I have such great respect for the fighters, which stems from my childhood as a Depression kid growing up in a poor neighborhood in St. Paul, Minnesota. I didn’t like fighting, except with the gloves on. I came to New York in 1960 and started drawing at Madison Square Garden. I’m amazed at every fight, watching these guys walk up the ring steps. I’ve done the good quarterbacks, the home-run hitters, (Alex) Rodriquez at third base. But I don’t know of any athlete who is as beautiful as a good fighter.

(Dave Newhouse, Before Boxing Lost Its Punch, Introduction (ebooks 2012).) Neiman was inducted into the International Boxing Hall of Fame in 2007. He grew up in St. Paul with “basement boxing” at his neighborhood Catholic church. He appears in the films Rocky III (as an artist sketching Balboa and as the ring announcer) and Rocky IV  (as the ring announcer). His artwork appears on the screen during the credits at the end of Rocky III.

In his 2012 autobiography Neiman wrote about growing up around boxing:

Boxing was a way out of the slums for street kids — a hard way to make an easy living, as the saying went — and during the Depression, pugs were invariably recruited from the underprivileged. We looked up to these guys, who were for the most part street hooligans in Everlast mitts. A cauliflower ear in those days was a badge of honor.

Jim had no illusions about being a contender for the world heavyweight title. He was a scientific boxer who refused to bring his street fighter’s kill-or-get-killed attitude into the ring. He was able to compartmentalize, control himself, and expend energy in installments over a lifetime.

If you knew the intensity he could bring as well as his street smarts, there wasn’t any doubt in your mind. You knew him to be one of the class of men you’d want with you in the event you found yourself facing a no-holds-barred meeting in some back alley. He'd know what to do; he'd learned well how to live by his wits.

He told the story of being a street kid coming up against a foe who gave chase. The guy was older and bigger. After wearing him out running, Jim turned around and took care of business. If fighting is undignified, Jim’s poise made it seem less so.

Thus there was an acquired dignity about Jim O’Hara. He wasn’t impressed if you were known as a good street fighter. He knew the potential cost of trying to get ahead outside the rules. He was impressed and pleased when you distinguished yourself within the rules, including sticking with school and getting a formal education.

​Late one evening in 1992, Jim telephoned. He was crying. "Your mother and I watched a movie tonight," he said. "A River Runs Through It. It's about two brothers. One was just like Mike."

Life is about people, and the depth of Jim's sorrow was too great for him to say anything more.